The Federal Reserve has made clear after its last meeting of 2019 that it will be in a holding period for most of 2020 as it assesses the impact of their policy moves on the economy. They will likely use this time to debate how best to respond to the next economic downturn and refine their policy toolbox. With the Fed set to take no action on interest rates any time soon, what will guide bond yields?

Economic data is important for bond yields because the Fed has made their policy adjustments data dependent, but since the Fed has announced no imminent adjustments, that data becomes a bit less consequential for the bond market in the short term. The data has also been mixed as of late, with manufacturing and wage growth flagging while retail sales, housing, and employment data remain strong. So, with data’s roll diminished, what will catalyze bond price volatility?

For most of last year the main catalyst was progress (or lack thereof) made in trade negotiations with China. This is logical, as the trade war has depressed growth in several industries in the US. The depressed growth forced the hand of the fed to be slightly more accommodative than they otherwise may have been, holding interest rates down. Since the Phase One trade deal was signed, some certainty has returned to the market and while inflation remains weak, it's keeping the outlook balanced for the Fed. There have been a 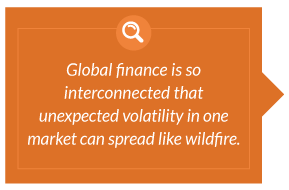 number of other geopolitical events that influenced yields from changes in government (Argentina’s recent election stunned emerging market debt holders on fears they would default), political protests (protests in Hong Kong, a major financial hub, hobbled businesses for months), to Brexit. While these events may seem distant and disconnected from US markets, global finance is so interconnected these days that unexpected volatility in one market can spread like wildfire. For instance, after the winning candidate in Argentina’s election implied that he’d be willing to default on their IMF loan, Argentine bonds tanked, which many other emerging market countries hold, putting pressure on their bonds as well. With many large US institutions holding portfolios of emerging market debt, the pain eventually spread to the US.

A more obvious political factor on our radar is the US general election, with the primary races just kicking off. With eight candidates vying for the democratic nomination, uncertainty will be rife. A few of the 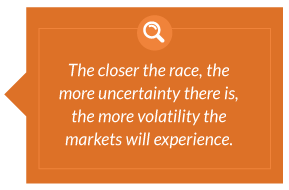 With the fed having signaled a period of assessment, the effect of economic data on market volatility is diminished. Therefore, market participants will be looking for events that could possibly dislodge the fed from this stance, such as a major geopolitical event (war or instability affecting US interests) or a shift in domestic politics (change in White House administration). The recent coronavirus outbreak is apparently not significant enough to get them to budge. The nature of politics is far more subjective than economic data and would imply more volatility in financial markets. As we enter 2020, global and domestic political headlines are likely to have significant influence in guiding bonds.