A Loan Officers Guide to Secondary Marketing - Part I

Remember the HITCHHIKER'S GUIDE TO THE GALAXY? At the core of this story, written long before today's innate reliance on smart phones and tablets, was the idea that there was this incredibly useful, incredibly simplistic guide to the entire galaxy, with the information in it contributed by the very people and aliens who were experiencing it every day.  And on the cover, a reassuring message to anyone overwhelmed by what was going on around them, “Don’t Panic.”

In honor of the late author, Douglas Adams, I thought I’d create a similar guide for originators that provides a glimpse into the seemingly mysterious world of secondary marketing and capital markets from the perspective of an experienced secondary marketer.

What is Secondary, and why is it not Primary?

Having been heavily involved in the secondary world throughout my entire mortgage career, it’s hard for me to comprehend how loan officers perceive the secondary marketing role.  My guess is that it looks quite mysterious and to be honest it sometimes still is to me. There are several secondary marketing professionals that either 1.) legitimately bask 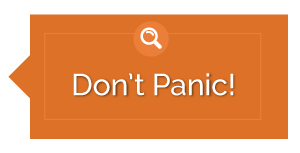 in the complicated nuances of the capital markets, or 2.) simply enjoy the fact that outsiders think that it's an incomprehensibly complicated field. The reality is the secondary market is not that opaque or esoteric. At least the basics aren't.

I will be the first to admit that there are many nuances about the secondary marketing process that can make heads spin. Not long ago, I joined in a discussion about margin management among several large corporation capital market executives. It certainly is fascinating to explore the strategies pondered when an aggregator translates a security price into a mortgage price, hoping to maximize production, but also with an eye on covering operational costs and profit expectations.  It was some heavy stuff, and definitely not what we are going to discuss in part 1, or even through the entirety of this "guide".

While the theoretical and mathematical intricacies may be interesting, loan officers don’t have to be intimidated by the details and should be open to understanding these fundamental, secondary marketing concepts and how they fit into the mortgage process.

Secondary (not primary!) marketing will generally focus on four concepts:

How to hedge that lock


At its core, it really is that simple!